LCLUC science research projects at NASA often have practical applications which are further developed under the NASA Applications Program. The focus of the Applications Program is to provide direct societal benefits from NASA research. The program addresses applications of national priority emphasizing partnerships with agencies with an operational mandate e.g. USDA, USFS, EPA, NPS, UNFAO and UNEP. These applications include aspects of agricultural efficiency, climate mitigation and adaptation, disaster management, water resource management, ecological forecasting and public health. The approach is to enable the assimilation of remote sensing data and Earth Science model outputs to serve as inputs to decision support systems. Through a process of benchmarking, verification and validation the enhancement to the decision support system is documented and a pathway developed for the operational transition. Current projects include the use of remote in forest management, fire risk mapping, fire and invasive species monitoring, flood inundation, crop yield forecasting and famine early warning. 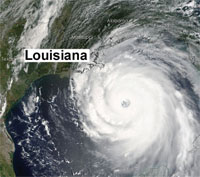 Two hours after the National Hurricane Center issued their warning for hurricane Katrina on Aug. 28th 2005, MODIS captured this image from NASA's Terra satellite at 1:00 p.m. The massive storm covers much of the Gulf of Mexico, spanning from the U.S. coast to the Yucatan Peninsula. View higher-resolution image.

The MODIS Rapid Response (RR) system was developed at NASA GSFC to provide near real time delivery of MODIS data for fire monitoring by the USFS. More recently the NASA Applications program has enhanced the RR system to support agricultural, flood and air quality and monitoring with USDA and EPA. Imagery from the RR system are used extensively for disaster monitoring, for example during the 2005 hurricane season. With a focus on rapid data delivery, the algorithms developed for the RR System and the associated web-based mapping have been made available to direct broadcast stations, leading to a large number of regional fire data distribution systems e.g.: CONABIO, Hot Spot Detection System , Mexico; AFIS, Advanced Fire Information Service, Africa; and Sentinel Fire Mapping, Australia.

NASA's Direct Readout Laboratory (DRL) at Goddard Space Flight Center (GSFC) is the implementation arm of NASA's Direct Readout Program. The DRL acts as the bridge between Earth science remote sensing missions such as Terra, Aqua, and the NPOESS Preparatory Project (NPP), and the Direct Readout (DR) community. The DRL encourages communication and maintains an open-door policy with the commercial and research and development sectors. This process provides the DRL with critical information on DR systems currently in use, Rapid Response near-real-time subsets technologies being developed commercially, and the needs of the DR community.

The DRL's close relationship to all of the stakeholders is critical to the promotion of standardization in DR pre-processing sub-systems; DR Science Processing Algorithms (SPAs); visualization and data processing systems; and real-time data/product transport methods and mechanisms. The DRL is able to report the "state of the community" to the NASA mission, while providing the community with a two-way dialogue between the mission objectives and the user needs. The DRL's understanding of both mission objectives and user needs guides the development of real-time DB data management and instrument-specific pre-processing tools. In order to maximize the utility of DB data, the DRL has been developing DR technology tools that will provide end users ready access to instrument data and derivative products from the legacy EOS Terra and Aqua missions, as well as the future NPP mission, thereby enabling real-time local and regional data processing and product generation that benefits and supports environmental, commercial, and public interests and the decision-making infrastructureThe tools have been designed to be scalable, extensible, portable and, most importantly, easy to use.

NASA is supporting Crystal Schaaf (Boston University) to convert selected MODIS data products codes to be compatible with direct broadcast product generation. One such example is the Nadir BRDF adjusted reflectance product. The MODIS instruments on board the Terra and Aqua platforms view the entire Earth at least once a day. However these acquisitions are necessarily made at varying view angles and thus some swaths may appear brighter or darker than adjoining swaths merely because the sensor sees varying degrees of sunlit or shadowed canopy and background. These view angle changes can add another source of variability to imagery that is being classified into land-cover and use categories. The MODIS BRDF/Albedo retrieves a measure of this surface anisotropy by fitting a bidirectional reflectance distribution function (BRDF) model to daily cloud-free, atmospherically-corrected surface reflectances acquired over a 16-day period. This BRDF measure can then be used to correct subsequent images to a single (usually nadir) view angle. The difference in adjoining swaths of surface reflectance of agricultural regions of the North China Plain is clearly visible. By applying the MODIS-derived BRDFs, these view angle effects can be removed and nadir surface reflectances of the entire region can be produced. View higher-resolution image. 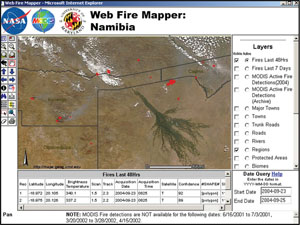 Transitioning from a research to an operational system with an emphasis on Protected Areas The Fire Information for Resource Management System (FIRMS) aims to transition NASA funded research results and observations to operational partners to support decision making for management of Protected Areas (PAs) worldwide. Specifically, a Web GIS developed by researchers at the University of Maryland (UMd) will provide active fire, burned areas and NASA imagery to protected area managers around the World in easy to use formats for decision making. The information will be delivered through web based interactive maps and email and text message alerts. The operational partners in this project are the United Nations Food and Agriculture Organization (FAO), the United Nations Environment Program (UNEP) and Conservation International (CI). 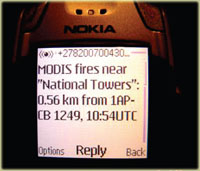 FAO and UNEP are natural hosts for such an operational system as they are the international operational agencies within the UN system that provide global environmental land information. At FAO, FIRMS will be housed in the Department of Sustainable Development and Natural Resources (SDRN) and will compliment their existing suite of projects that deliver near real time information to ongoing monitoring and emergency projects, as well as providing information to the general public. FAO will also provide a direct feed of data to the UNEP-GRID Global Wildfires monitoring site. UNEP-GRID will use the system to enhance the Division of Early Warning and Assessment website which seeks to provide real time information on global fires. The fire data will also be served over the internet by CI's Center for Applied Biodiversity Science, a US based NGO to both its regional projects and the broader NGO community. Obtaining satellite derived fire information in a user-friendly format, and in time to use it for operational fire management, has not been easy for park managers working in remote locations and with limited access to the internet. Protected area managers are usually interested in relatively small areas - generally their park and its surroundings. They also require fire information delivered with minimal file sizes that can be accessed by anyone with internet connectivity. FIRMS will meet these requirements in three main ways: by providing MODIS active fire information via an interactive Web Mapping interface, by providing subsets of true color MODIS images and also by delivering fire alerts through emails and cell phone text messages. Additional information can be found at: http://maps.geog.umd.edu/ 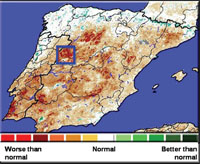 NDVI anomaly image created using MODIS data collected between May 25 and June 9 2005 compared to the mean NDVI for this time-step between 2000 and 2004. The entire Iberian Peninsula was clearly stressed due to the drought in 2005. Reds/Brown represent the regions where vegetation is thin and less dense than average, while tiny flecks of green show where vegetation is healthier than average. View higher-resolution image.

The primary mission of the FAS is to provide agricultural information for global food security through delivery of objective, timely and regular assessments of global agricultural production outlook and the conditions affecting it. To monitor crop conditions, the FAS analysts are provided with multiple remotely sensed products from moderate resolution sensors for target agricultural regions worldwide. This includes providing USDA crop analysts with a sophisticated web interface for analyzing MODIS temporal composites of vegetation index (VI) data, at 250-meter resolution. The web interface provides analysis tools which allow the crop analysts to drill down to the pixel level of detail. Using these data and tools, FAS analysts track the evolution of the growing season and make inter-annual comparisons of season dynamics between individual years as well as relative to reference long-term mean conditions. These comparisons yield anomaly images and plots highlighting regions that have undergone a change in productivity indicative of land-use/cover change. These changes may be due to direct anthropogenic factors such as deforestation and land conversion from forest to croplands and expansion of urban areas; or change due to weather factors such as heat stress, drought, and storms. 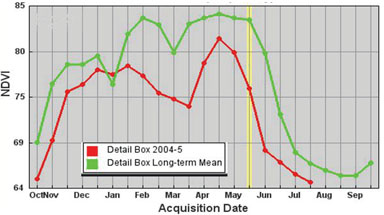 NDVI graph comparing the 2004-05 season with mean conditions for the highlighted crop region in the blue box. The red line, consistently below the green line indicates highly reduced NDVI values throughout the season, due to the severe drought. View higher-resolution image.

To successfully monitor worldwide agricultural regions and provide accurate agricultural production assessments, it is important to understand the spatial distribution of croplands. To do this, Matthew Hansen at SDSU, has developed a global croplands mask to identify all sites used for crop production. Croplands are highly variable Iberian Peninsula drought in 2004-05 depicted by database GUI NDVI anomaly image created using MODIS data collected between May 25 and June 9 2005 compared to the mean NDVI for this time-step between 2000 and 2004. The entire Iberian Peninsula was clearly stressed due to the drought in 2005. Reds/Brown represent the regions where vegetation is thin and less dense than average, while tiny flecks of green show where vegetation is healthier than average. NDVI graph comparing the 2004-05 season with mean conditions for the highlighted crop region in the blue box. The red line, consistently below the green line indicates highly reduced NDVI values throughout the season, due to the severe drought. both temporally and spatially. Croplands vary from year to year due to events such as drought and fallow periods, and they vastly differ across the globe in accordance with characteristics such as cropping intensity and field size. A flexible crop likelihood mask is used to help depict these varying characteristics of global crop cover. This flexible croplands mask which is in currently being validated, is generated by analysis of 4 years of MODIS data (2001-2004). Rather than the traditional static yes/no crop mask, the new map depicts crop likelihood allowing users, to threshold cropland membership according to their needs. Regions featuring intensive agro-industrial farming practices such as the Maize Triangle in South Africa will have higher confidence values in the crop mask as compared to less intensively farmed regions in parts of Sub-Saharan Africa where cropland identification is partly confounded with natural background vegetation phenologies. Thus, a customized threshold can be employed to examine areas of varying cropping intensification.