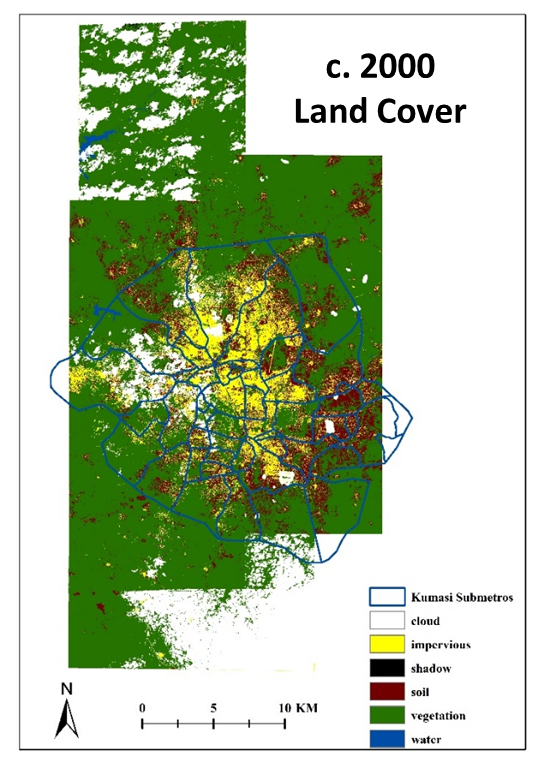 Land cover maps and land use maps were created using high spatial resolution, commercial satellite imagery for Kumasi, Ghana for both c. 2000 and c. 2010.  The land cover maps include the following classes:  vegetation, impervious, soil, water, cloud, and cloud shadow.  The land use maps include:  residential, non-residential, undeveloped, water, cloud, and cloud shadow. These multi-date products were created in order to assess land cover and land use change (LCLUC) and its effect on demographic and quality of life factors.

The technical objective of the component of our NASA IDS urban study, from which these LCLU/C maps were generated, was to assess the utility of using segmentation and classification information derived from an object-based classification of an image at a later date (t=2) to aid in the segmentation and classification of an image at an earlier date (t=1) for the same area. High spatial resolution Ikonos and WV-2 satellite images were orthorectified in order to provide accurate spatial positioning and precise relative alignment between the multitemporal images. For the orthorectification, horizontal ground control points (GCPs) were selected from accurately positioned DigitalGlobe images available in Google Earth. Vertical ground control was extracted from NEXTMap World 30 digital elevation data purchased from Intermap. A triangulation procedure incorporating the GCPs, using second-order polynomial refinement, and applying bi-linear interpolation was implemented as part of the orthorectification process.

The general image classification workflow consisted of classifying the t=2 image, and then using this product as an aid in classifying the t=1 image. An OBIA approach was adopted using eCognition software. We followed a traditional object-based image classification approach, which has three main steps: segmentation, classification, and generalization. Two maps of differing scale hierarchy were generated for both multispectral images, a finer-scale vegetation-impervious-soil (VIS) map and a coarser-scale land use map. The image object hierarchy in eCognition was used to generate the two maps such that the VIS image objects (Level I) are sub-objects of the land use objects
(Level II).