The objectives of this proposed project are: (1) to identify, map, and quantify land cover and land use change (LCLUC) within an extensive study area of Ghana over 25 years (1986 through 2010), (2) to understand the relationship between rural-to-urban migration as an outcome of LCLUC and concomitant drivers for the 2000 through 2010 period, and (3) to assess LCULC and its effect on demographic and quality of life factors for four major Ghanaian urban centers during this time period. Our interdisciplinary team consists of remote sensing, human-environment, landscape, ecological, and social scientists from San Diego State University (lead), The George Washington University, University of California Santa Barbara, and University of Ghana Legon, will address the hypothesis that virtually all of the major LCLUC in both rural and urban areas of Ghana are directly or indirectly driving patterns of inter-regional population change. We will map and quantify LCLUC at two spatial scales: (1) inter-regional scale for the Greater Accra, Central, and Ashanti regions of southern and central Ghana, and (2) intraurban scale for Accra, Kumasi, Cape Coast and Obuasi, the four major cities within the study area. Inter-regional identification of LCLUC will be based on moderate spatial resolution, multi-temporal image data from Landsat ETM+ and Terra ASTER optical satellite systems, and where/when required, SPOT HRV, AWiFS and DMCii., as well as from ERS-2 synthetic aperture radar (SAR) satellite systems. High spatial resolution image data from QuickBird and IKONOS commercial satellite systems will be utilized primarily for intra-urban mapping and analysis of LCLUC. Archived data from these systems are available from the mid-1980s to the present. However, cloud cover and satellite system continuity issues necessitate novel image acquisition and processing approaches for generating and analyzing multi-temporal image data sets at both spatial scales of analysis. We will utilize quantitative spatial analysis techniques to examine relationships between LCLUC and magnitudes and changes of demographic, socioeconomic, and health variables. Satellite-derived LCLUC and its impacts on demographic and socio-economic dimensions of the target populations will be analyzed across four regions (states) in Ghana. In addition, we will examine the effects of LCLUC on quality of life indicators such as child mortality, migration, slum indices, and food security, within four of the major cities of Ghana. Quantitative analysis tools will include generalized linear and multi-level regression models, multinomial logit models, regression tree analysis, and agent-based models. The proposed project is responsive to all elements of the NASA ROSES 2011 Interdisciplinary Earth Science (Urbanization) research announcement. LCLUC will be examined from both the detection and impacts standpoints. Based primarily on data from NASA satellite systems, we will develop and implement procedures for mapping LCLUC of agricultural and urban lands at inter-regional and intra-urban scales. We will also examine relationships between LCLUC as a driver for rural-urban out-migration at interregional scales and subsequently as a driver of urban LCLUC. In addition, we will examine the effects of urban LCLUC on quality of life indicators such as child mortality, slum indices, and food security, within four of the major cities of Ghana. Ghana is a developing country in West Africa, which is not a region that has been emphasized in previous NASA LCLUC studies. Key socio-economic processes that will be studied are demographic transitions (particularly rural to urban migration), urban growth (intensification and expansion) and its impacts on health and consumption of agricultural lands, and the transformation from subsistence to commercial agriculture 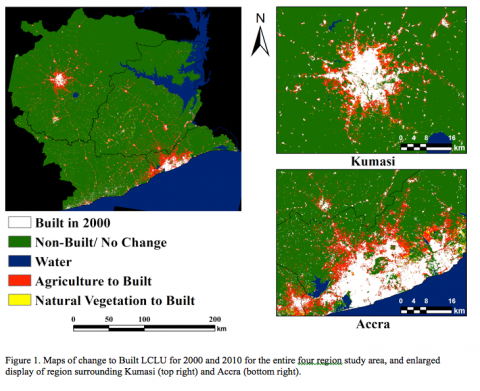