This project mapped land-cover and land-use change (LCLUC) if five countries of Mainland Southeast Asia (MSEA) – Cambodia, Laos, Myanmar, Thailand, and Vietnam – that over the past half past century have witnessed a major shift from subsistence agrarian economies to commercialized agriculture and, in the case of Thailand and Vietnam, industrialized societies. The project had two major objectives. First, we synthesized knowledge from seven previous and ongoing projects in the five-country region by studying transitions in forests, boom crops, and urban areas using remote sensing data sources and socioeconomic databases for the 2000-2012 period. Second, we enhanced the conceptual underpinnings of land change science by integrating aspects of land teleconnections, land use transitions, and political ecology to explicitly link land changes to local, national, and international drivers. The project documented change at both regional and local scales. At the regional scale, we focused on changes in forests and boom crops in upland areas above 300 masl, as well as urban expansion. Mapping changes in tree-dominated landscapes in MSEA is challenging because of the diverse types of tree covers–ranging from the secondary forests associated with shifting cultivation, deforestation, afforestation, to the expansion of new tree crops, as well as processes of change (e.g. natural vs. planted forests temporal dynamics related to shifting cultivation vs. expansion of permanent agriculture). Mapping periurbanization also remains difficult because there is no one standard method for defining or delineating these complex, heterogeneous areas. Given common themes in the ways the Co-PIs have approached these issues in the past (hypertemporal data mining, supervised classification, data fusion), we mapped boom crops and periurbanization simultaneously using a hierarchical, two step approach. We first located areas of change using MODIS EVI data. We then determined the type of change occurring in each hotspot by assessing multiple sources of remote sensing imagery, census data, and expert knowledge for each area. We simultaneously reviewed the socioeconomic literature on factors affecting the expansion of boom crops and urban areas in the region. Finally, we produced a comprehensive set of regional scale maps and datasets that reveal the complex story of LCLUC in the MSEA region between 2000 and 2012 and supported these maps with national scale narratives of policies on land, labor, capital, and other socioeconomic factors driving these changes. At the local scale, our work centered on sites in Laos and Cambodia where the hasty expansion of boom crops is of international concern. In these two countries, we accessed extensive secondary data including national and agricultural census data available at high spatial resolutions, and maps of land concessions, land cover, plantations, protected areas, etc. We capitalized on our access to these data to identify a sample of sites where we mapped and documented rapid change in greater spatial and temporal detail. All team members collaborated to document how investments made in one place affected land use in other places, and how that land use change may drive other land use changes at other sites. By integrating aspects of land change science and actor-network theory with remote sensing data, we produced an integrated understanding of LCLUC in areas of expanding boom crops and periurbanization in MSEA. We documented not only how distal drivers affected LCLU in a collection of sample sites, but also how those changes drove other LCLUC distally. The project provided an empirical understanding of political, economic, and social forces driving LCLUC at the local level. 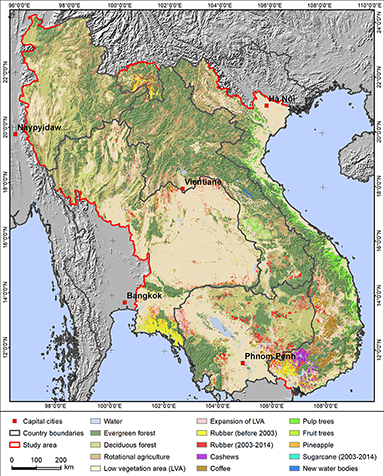