The Food and Agriculture Organization (FAO) of the United Nations and the World Food Program estimated that in 2009 approximately 1.02 billion people are undernourished, the highest number in four decades, and 29 countries currently have alarming levels of malnutrition, mainly in Africa (e.g., Ethiopia, D.R. Congo, Niger), and South Asia (e.g., India, Bangladesh, and Pakistan). Long-term agricultural development is critically needed to ensure more self-sufficient in crop production, food security and the livelihoods of poor people in developing countries. This requires updated and accurate information on the area and spatial distribution of cropping intensity (single, double, and triple crops per unit land in a year), irrigation, and crop yields these agro-ecological attributes are sensitive to climate change, extreme weather events (e.g., drought and flood), and macro-scale socio-economic (e.g., use of food crops for bio-fuels) and demographic (e.g., population growth, urbanization) conditions. In this proposal a multi-institution and international research team is organized to address two key LCLUC questions: (1) What are the rates of changes of agriculture intensification and expansion in monsoon during 2000-2010, the 1st decade of the 21st century? (2) What are the dynamics of the macro-scale driving factors that led to the observed changes in land use and land cover during 2000-2010? The overall approach is built upon the recent progress in our ongoing NASA LCLUC project that combines Landsat images (Global Land Survey 2005 dataset) and L-band PALSAR images to map land cover types in Southeast Asia. We plan to augment the GLS2000 and GLS2005 datasets with additional Landsat images available from the USGS EDC and partners in monsoon Asia countries, and provide pilot case study for supporting the future GLS2010 activity. We will develop phenology- and pixel-based algorithms to identify and map cropping intensity, irrigation and paddy rice fields, using time series PALSAR images and/or Landsat images. This project will deliver a number of datasets, products and tools that would substantially enhance our capacity to address both LCLUC science and food security and sustainability: 1. Annual maps of cropping intensity and irrigation in monsoon Asia from multi-temporal Landsat and PALSAR images in 2007-2010 (30-m spatial resolution) 2. Geospatial datasets of changes in cropping intensity and irrigation in monsoon Asia in 2000, 2005, and 2010 (30-m spatial resolution) 3. Maps of paddy rice in monsoon Asia in 2000, 2005 and 2010 (30-m spatial resolution) 4. Co-registered time series Landsat and PALSAR images that could be used for other land cover studies and retrieval of biophysical parameters and 5. An enhanced geo-web data portal system for data distribution, collection and evaluation from both experts and citizen scientists, and decision makers. http://www.eomf.ou.edu This proposal will address both the Detection and Driver components of this NASA ROSE2009 A.2 NRA. It will also benefit the NASA Agriculture Application Research and Development element. The proposal will help develop a strategy for global agriculture monitoring, a component of the international program, the GEO Task AG-07-03a Global Agricultural Monitoring System of Systems. This proposal will also provide key datasets to the International Monsoon Asia Integrated Regional Study (MAIRS) program, which focuses on the complex dynamics of coupled human-nature system in monsoon Asia. 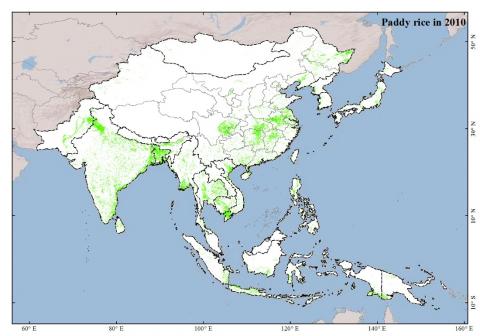