While the urban heat island (UHI) effect is well documented, most evidence is based on cities in temperate areas. Recent work suggests that urban desert areas in the tropics and sub-tropics have the opposite effect-they cool rather than heat the area. The proposed research examines the distribution of urban infrastructure and vegetation in and around subtropical desert cities and the effects they have on local and regional climate to address the following (A) The influences of internal urban features, land fragmentation and spatial arrangements of land cover and land use (LCLU) in both the urban space and surrounding areas. (B) LCLU patterns and rates of change within and around selected cities over time (1990-2010). (C) Warming and climate change/variability impacts on the livability, resources, sustainability and growth of the cities. (D) The balances between oasis cooling, surface morphology and fabric infrastructure heat storage and warming effects and their impacts over space and time. (E) The magnitude and long-term influence of desert urbanization on regional precipitation, temperatures and airflow patterns. (F) Adaptation, alternate management and land use planning scenarios for sustainable city development in these environments. Five sub-tropical desert city regions have been chosen-Las Vegas, USA Beer Sheva, Israel Jodhpur, India Kharga, Egypt Hotan/Hetian, China. Remote sensing, numerical modeling, land change simulation, ground data, demographic analysis, the variability of rural and urban climate and associated changes in socioeconomic and biological conditions will be used. Landsat Thematic Mapper data acquired over and around the selected cities in 1990, 2000 and 2010 will be employed. Overall goals are to better understand the impacts of changing land cover spatial distribution, patterns and arrangements within and around these cities in relation to climate change and to use this knowledge to support adaptive management and foster sustainable desert cities. To achieve this, researchers seek to answer the following questions. (1) How does the oasis effect of cities in these environments vary over space and time? (2) How do the internal features and spatial arrangements of land cover influence temperatures in desert cities and their surrounding desert environments? (3) What are the patterns and rate of change of LCLU including desert vegetation and agriculture within and around select desert cities over time (1990-2010)? (4) What is the relationship between surface and air temperatures and a) desert urban growth, b) the rate of change of dark and bright impervious surface areas and c) land cover within and around desert cities? (5) What is the impact of the spatial arrangements of land cover and land fragmentation within and around desert cities on the surrounding environments? (6) How is UHI related to desert city population as compared to other cities in different climate regions? (7) What is the relationship between population, surface temperatures and vegetation at various administrative boundary levels? (8) Are surface temperatures related to the pattern of demographic growth in different cities? If yes, how? (9) How are precipitation, temperature and regional airflow patterns associated with the oasis effect? (10) What are the typical changes in these meteorological states associated with land-use changes due to urbanization? (11) What is the urban area s "circle of influence" i.e., does urbanization significantly alter local climate beyond the metropolitan area? (12) How universal are the urban effects on regional climate? (13) What will future precipitation, temperature and regional airflow patterns in arid and semiarid environments be around desert cities using the predicted LCLU change for 2030? (14) What adaptive options, alternate management opportunities and land-use planning scenarios will changes in manmade and natural landscapes offer for sustainable city development in desert environments? 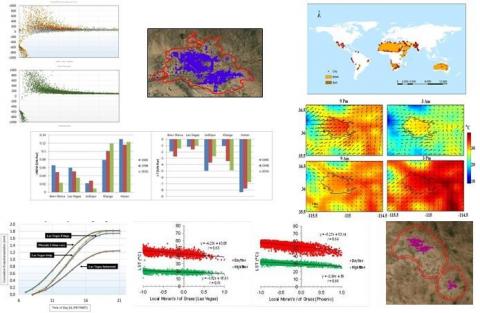