Over the next two decades, the combined urban population in China and India will grow by more than 700 million. China's urban population is expected to increase by 400 million and India's urban population will nearly double from today's 350 million. The urban transitions underway in these two countries represent the largest urban transition in history. Put into a global context, by 2030, nearly one-third of the world's urban inhabitants will live in either China or India. The proposed project aims to quantify and understand the growth of urban clusters in these two rapidly urbanizing countries. The emphasis on urban clusters reflects recent research from the allied fields of economics, urban planning, and political science that indicate that the urban cluster is an important functional unit for economic, policy, and land use planning. The project has three primary goals: Goal #1: Detect and quantify the growth of urban cluster â€śhot spotsâ€ť in China and India. We will use time series MODIS and DSMP OLS imagery to develop remote sensing methods that can rapidly identify urban clusters that are experiencing rapid expansion. Goal #2: Identify the types of land cover changes in these urban cluster hot spots and when they occurred, with an emphasis on the loss of agricultural land. Within the urban cluster hot spots, we will use time series MODIS and DMSP OLS data in complementary ways to develop new algorithms that can rapidly assess what types of land cover changes are occurring and when they occurred. We will use Landsat-derived data sets developed from the Chinese Academy of Sciences and previous NASA LCLUC projects to accuracy assess our analysis of types and timing of urban land conversion and agricultural land loss. Goal #3: Explain the drivers of the growth of urban clusters and urban land conversion within them. We will evaluate the drivers of urban land conversion within an individual urban cluster and among urban clusters at the national scale. We will assess why urban growth occurs within a single urban cluster, and why some clusters grow faster than others. The proposed research responds to both elements of the NASA LCLUC solicitation (detection and drivers) and has at its core, a strong remote sensing component complemented by analytical frameworks from political science, economics, urban planning, and geography. Expected significance and benefits of the research include: 1) An improved scientific understanding of urban land conversion processes and their underlying drivers in China and India 2) Developing new remote sensing algorithms that can rapidly detect and characterize the growth of urban cluster hot spots 3) Creating new data sets that quantify and characterize urban land dynamics and agricultural land loss at regional and national scales useful to other Earth system science research efforts. RESPONSIVENESS TO SOLICITATION The proposal responds to both components of this NRA. The first component of the project will use multi-sensor and multi-scale satellite data to detect and quantify "hotspots" of urban expansion. The second component of the project is to identify land cover changes within the hot spots, and the third component is to identify and model the drivers of urban expansion. REMOTE SENSING METHODS We will use a multi-scale approach to highlight and detect areas of urban expansion using a combination of the Defense Meteorological Satellite Program Operational Line Scanner night lights, multi-temporal Landsat imagery, and data from MODIS. SOCIETAL SIGNIFICANCE The proposed research contributes directly to NASA's goal of studying Earth from space for societal benefits, and NASA's objectives of quantifying global land cover change. The research also contributes to two international projects closely aligned with NASA's LCLUC program: the IGBP/IHDP Global Land Project and the Monsoon Asia Integrated Regional Study. 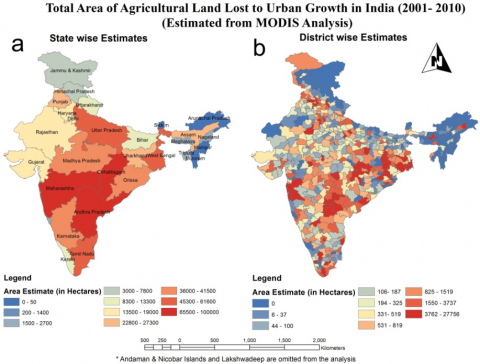