South Asia is at the forefront of concerns about future food security. Population growth, continuing rural poverty, water shortages, stagnating yields, and climate change all contribute to these concerns. Despite agricultural intensification over the last several decades, agriculture in the region remains highly sensitive to monsoonal rainfal. Commonly-held assumptions that the poorest farmers and rain-fed agriculture are more vulnerable to climate variability than commercial farmers are not supported by empirical evidence. More detailed understanding of this climate sensitivity is hampered by the coarse scales of previous studies conducted with data at the level of national and sub-national administrative units. Fusion of satellite data from multiple sources enables us to examine the sensitivity of agriculture to climate variability at more revealing, finer spatial scales than has previously been possible. Building on our previous work in other parts of the tropics, this project will detect the spatial patterns and temporal variability of cropping patterns throughout India from 2000 to the present at 250m spatial resolution. We will use data from MODIS, Landsat, Tropical Rainfall Mapping Mission (TRMM), and other sensors to establish annual estimates of cropping patterns and rainfall anomalies. Time series of MODIS Enhanced Vegetation Index (EVI) data will be used to identify number of crops and agricultural productivity based on phenological profiles. Higher resolution Landsat data in selected locations will enable us to quantify landscape heterogeneity at the 250m scale. We will incorporate publicly available satellite-derived data on irrigation and forest cover to help interpret the relationship between climate anomalies and cropping patterns. Other available, district-level non-satellite data on dominant crop type, size of land holdings, yields and indicators of adaptive capacity such as education level and income will enable us to explore factors associated with agricultural sensitivity to climate variability. The ultimate goal of this research is to enable risk mapping and inform effective approaches for adaptation to climate variability in the region. Data sets on cropping patterns at 250m resolution and aggregated to district level for each year from 2000 to present will be made available to the community of researchers investigating climate impacts on agriculture. 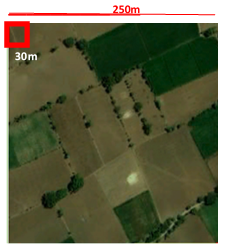