This project is to contribute to the NASA ROSES LCLUC program by generating a consistent global urban map series and developing an integrated modeling framework to project future urban expansion. Our goal is to improve the understanding of global historical urban expansion, its socioeconomic drivers, and potential future urban expansion. We propose an interdisciplinary research program to achieve our research goal through four objectives: Objective 1: Building a consistent global urban map series. We will develop an algorithm to build a series of consistent maps of urban extent from 1992 to 2010 using NASA products and DMSP/OLS Nighttime Lights (NTL) data. The algorithm will include several key steps that address challenges in extracting urban areas from NTL data such as gas flare and overestimation. The global urban maps will be validated using finer spatial resolution satellite data in areas where urbanization is important and these high-resolution data are available. Objective 2: Analyzing global urbanization and its driving forces and developing a region-specific macro-scale statistical model. Using the global urban maps, we will analyze the amount, rate, and patterns of urbanization and the temporal and spatial differences across national and sub-national boundaries, and explore socioeconomic and demographic forces driving these differences, such as population change and GDP growth. We will then develop a region-specific macro-scale statistical model for urbanization projection at the regional level. Special attention will be paid to the analysis in developing and underdeveloped countries, where methodological challenges exist and improvements are more needed. Objective 3: Developing an integrated framework to project future urban expansion. We will combine the top-down macro-scale statistical model developed in Objective 2 with a bottom-up Cellular Automata (CA) based Urban Growth Model (UGM), and develop an integrated modeling framework to project urban expansion. The interaction between urbanization and its socioeconomic drivers will be considered in the projection through an embedded Global Change Assessment Model (GCAM) and the statistical model by using a set of consistent exogenous and GCAM projected variables. Objective 4: Exploring scenarios of urbanization projection and its implications. We will construct alternative climate and socioeconomic scenarios to explore the robustness of the urbanization projection and improve our understanding of potential trajectories of future urbanization in the challenge of climate mitigation. Moreover, we will investigate the implication of spatially explicit urban projection by taking building energy use as an example. The outcome of this research will represent a unique contribution to a comprehensive understanding of historical urban growth and future spatially explicit projection from a global perspective. Understanding historical global urban dynamics and future urban expansion, especially its spatial dynamic, will enable land managers and decision makers to explore future urban dynamics under certain scenarios, and therefore direct urban development under the framework of global climate change mitigation. By combining unique remote sensing data and socioeconomic modeling capabilities from NASA, NOAA, and DOE, our proposed research falls under the priorities of NASA’s LCLUC Program: forcing factors, responses and consequences, and modeling and implications. Particularly, the proposed work aligns uniquely with special interest of this solicitation: differences in land cover and land use across political borders and their primary causes. This research aims to answer several key science questions identified in the LCLUC research program, including: Where is urban growth, what is the extent and over what time scale and how do the changes vary from year to year, and what are the causes? What are the projected urbanization and its potential impacts? 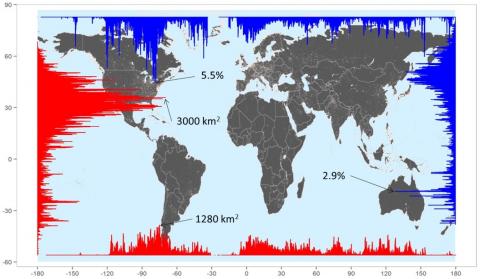