Urban areas are expanding as a result of a rapidly increasing urban population. While urban areas still occupy today only ~3% of the Earth's surface, their impacts on local and regional meteorology, pollution and resource utilization are disproportionate to their overall area on the planet. With urban populations expected to reach 60% of the total global population by 2030, it is critical to develop the methods with which to measure and monitor global urbanization and its impacts at the appropriate spatial scale. The availability of consistent, global scale, satellite data sets such as the Landsat-based Global Land Surveys (GLS) provide a unique opportunity to accurately measure impervious cover at high spatial resolutions, at the global scale, as well as its change over time. We propose to use the global GLS archives to produce global, high resolution estimates of impervious cover for the 2000 and 2010 time periods, and to quantify the change in impervious cover worldwide over this 10 year period. The proposed processing framework is based on well-established regression tree and image segmentation algorithms and uses state-of-the-art processing techniques for the Landsat data, including atmospheric correction. Processing of the 2000 GLS data and planned 2010 GLS data to surface reflectance will be performed at the Global Land Cover Facility (GLCF) at the University of Maryland. Sub-pixel fractions of impervious cover are derived at the ~30m Landsat resolution using 1-4m higher resolution training data from the IKONOS and Quickbird commercial satellites, available through the unclassified commercial data service of the National Geospatial-Intelligence Agency (NGA). Product validation is achieved by comparison to independent very high-resolution data but also via direct field measurements at schools throughout the world through a partnership with the GLOBE Program. The tools/products developed are envisioned as the foundation for a future urbanization monitoring network integrating past Landsat data with future data from the Landsat Data Continuity Mission (LDCM). 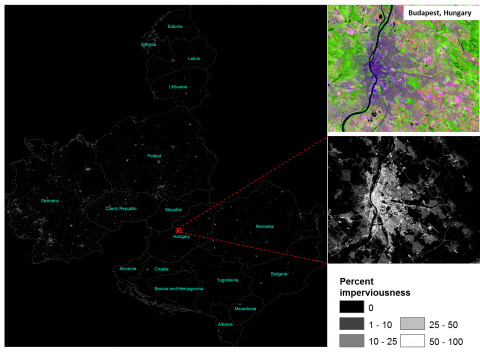